All CONVECTRONICS’ temperature sensor products are designed and manufactured to applicable ISA standards with accuracy traceable to the National Institue of Standards and Technology (NIST).

American National Standard Institute (ANSI) nomenclature is used by CONVECTRONICS. Standard or Special Limits of Error contained in ANSI Circular MC 96.1 – 1982 can be specified by the customer when ordering CONVECTRONICS’ Thermocouple products.

Thermocouples are the most common, convenient and versatile devices used to measure temperature. They convert units of heat into useable engineering units that serve as input signals into process controllers and recorders. 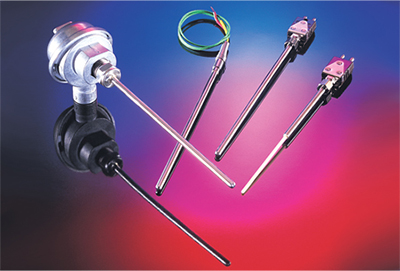 A Thermocouple consists of a welded “hot” junction between two dissimilar metals – usually wires – and a reference junction at the opposite ends of the parent materials.

Heating the “hot” junction in the working environment produces a temperature gradient which generates an EMF. The EMF appears across the free ends of the thermocouple wires, where it is measured and converted into units of heat calibration.

The Resistance Temperature Detector (RTD) is a sensor used for precise temperature measurement in extreme heat environments where temperature is derived as a function of metallic element resistance. 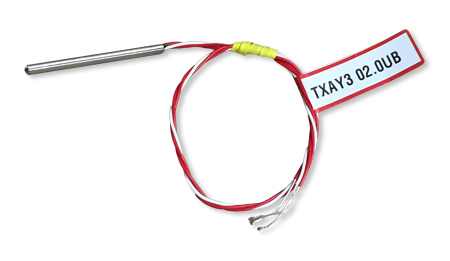 As temperature increases, so does resistance. The heat produced by a process or application can be measured by running a small current across the specific metallic element in the RTD and measuring the voltage produced, which is then converted to temperature units.

The linear relationship between temperature and resistance is constant across a variety of elements, which simplifies engineering requirements.

Other components usually essential in integrating the principles of Thermocouples, RTD’s, and Thermistor sensor into a functioning system may include: (1) A protection tube or sheath of a material suitable to protect the sensing element from the environment surrounding the point of measurement, (2) A connecting head and terminal block, or possibly a temperature transmitter, (3) Leadwire of the correct material and insulation to connect the temperature sensor and the process instrumentation, and (4) Recording or controlling instrumentation and control devices to provide a continuous temperature history of the system and to provide constant or programmed temperature regulation.

Fill in two values to find the other two.

Calculate the total resistance in ohms of resistors that are in parallel by entering the value of each below.

Calculate the resistance in ohms of resistors connected in series by entering the value of each.